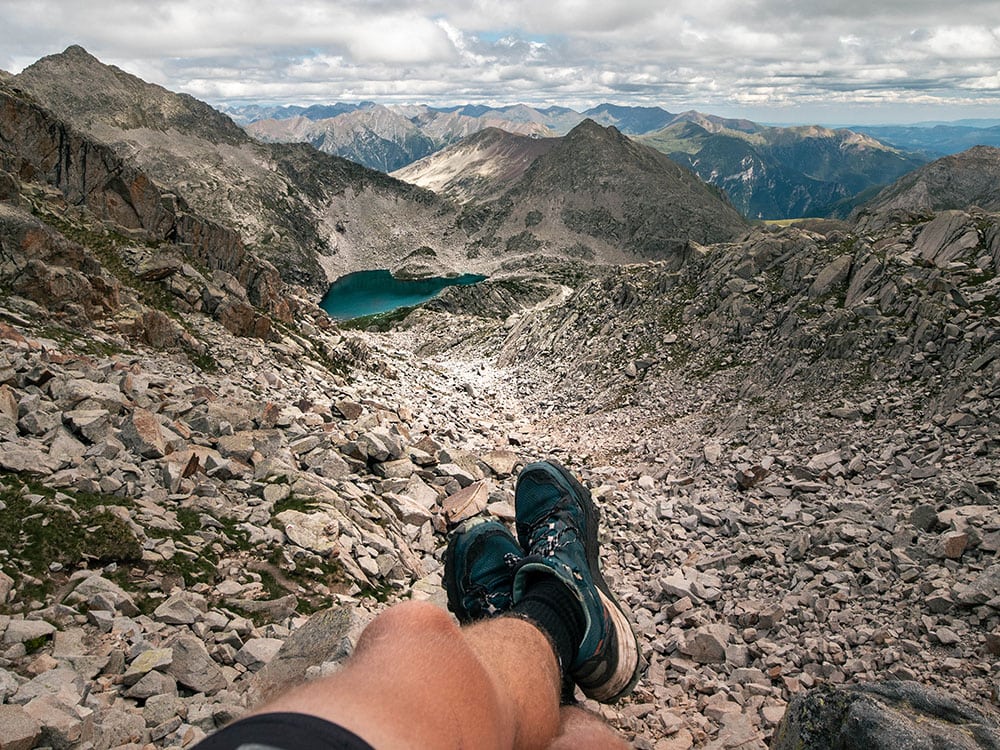 I recently finished an 800 km (500 miles) thru-hike, and I chose the Decathlon Evadict Mt2 trail running shoes as my only footwear. Initially, I wanted to walk in something more expensive, which I knew would be durable, but I ended up trying out the Evadict Mt2 shoes, just because they were really affordable and from my initial impressions felt extremely comfortable.

The Evadict Mt2 trail running shoes are made from a polyester/polyurethane blend with custom Decathlon rubber soles. Even when checking them out at the store, I knew that they wouldn’t be as durable as something more expensive, such as the lone peak Altra 5 trail runners, which are one of the most popular thru-hiking shoes.

But I was secretly hoping that they’ll last for the whole thru-hike. And low and behold – they did! However, they definitely weren’t in a good condition.

The first signs of wear started happening at about 100 km (60 miles). The fabric cushioning on the inner part of the shoe near the ankles started tearing apart and I could start to see the inner padding. That said, this issue has developed on almost all of my shoes because I tend to place my feet too close together, and occasionally, they brush against each other. Maybe that’s why I’m having knee problems? Anyway, the padding did seem to continue wearing off, but this wasn’t a major issue, even until the finish because this doesn’t affect the comfort of the shoe in any way.

After about 300 km (185 miles) I noticed my first and only hole – in the inner part of the toebox, where the toes bend on every step. At first, it was only on the outer part of the shoe, not the inner padding, but by the end, I could put my finger through the hole. This started on the left shoe and after another 100 km, the same thing happened to my right shoe. My biggest fear was that this hole would eventually become bigger and the sole would come off, but fortunately, they didn’t and I was able to finish the hike. Even though having a hole in each of my shoes wasn’t pleasant, the issue was nothing more than a cosmetic one.

The main issue that I had with the durability though was that the sole and the thread started wearing off very quickly. After about 300 km (185 miles) I could start feeling some sharper rocks pushing through into my feet every now and then. They were still comfortable enough but after about 500-600 km (310-370 miles) I seriously thought about taking a day off to buy a new pair of trail runners. When I was walking on a lot of rocks I could feel the sharpest ones digging into my feet. I decided to continue with these trail runners, but it wasn’t ideal. After finishing the hike, my feet were very numb every morning for a few weeks to come due to this issue. Honestly, I should have switched to a new pair after 500-600 km (310-370 miles), so don’t expect these trail runners to last much more than that.

And lastly, the bottom lace hoops started breaking one by one. The problem is that at the bottom, they’re held together with more laces, which are integrated into the shoe. After a while, they wear down from friction and break. So in the end, I had to skip the bottom hoop, which wasn’t a bad thing because it gave me more room for my toes.

The Evadict Mt2 trail running shoe was very stable for the first few hundred kilometers. After that, the sole started wearing off, and the shoe became very flexible, so the wide sole didn’t make much difference.

This shoe does come with protective plating on the front and the back, but it definitely isn’t rock-solid. That said, I never experienced problems with this on my thru-hike. I’d accidentally hit my toes against some rocks quite a few times and didn’t end up with any problems, so I’d say that the protective toebox works well enough.

This definitely isn’t a zero-drop shoe, which is preferred by a lot of thru-hikers, but the drop isn’t too high either, measuring at 8mm. Overall, I would say that the Mt2 provided enough support and stability, at least for my own needs.

The Evadict MT2 weighs just about what a medium-weight trail runner would be – 340 g / 12 oz for a single, size 10 shoe. For comparison, the ultralight Altra Peak 5 weighs 250 g / 8.8 oz, and the more-robust Salamon Speedcross 4 weighs 330 g / 11.6 oz. So nothing to get too excited about, but at least they aren’t heavy. Supposedly, they weighed even more in the previous version – MT1.

The main reason why I chose this shoe for my thru-hike was because of how comfortable it felt right from the first time I put them on. They’re pretty wide around the toes, they felt like they were shaped exactly for my feet, and they had plenty of padding in the right places. And even though the sole has worn down significantly, they’re still more comfortable compared to my twice as expensive Salamon Speed Cross 4 trail runners.

During the whole thru-hike, I didn’t get a single blister. However, before starting the thru-hike, I did break in these trail runners for about 50 km (30 miles). And I think the main reason why I didn’t get any blisters was mostly due to my choice of socks, not the trail runners themselves. I chose the Silverlight hiking socks, which proved to be perfect, but that’s another story. I’m leaning towards this theory because the first day I wore the Evadict Mt2 to break them in, I wore them together with cheaper merino wool socks, and I did notice that a blister was starting to form just after a 15 km (9-mile) day hike.

The Evadict Mt2 comes with flat laces, which, at the start, held together really well. But mid-hike, I noticed that they started to untie by themselves, regardless of how strongly I tied the knot. So I ended up doing a double knot for the rest of the hike. I think the laces started to stiffen up from all the dirt and mud, which made them start untieing by themselves after a while.

One thing that I really liked though is the lace pockets which are located just above the knot. You can tuck away the laces in there, which I found to be pretty useful.

At the start, for the first 300 km (185 miles) the traction on the MT2 was really great. These shoes come with a custom Decathlon rubber sole with 5mm lug depth, and they had really good traction on rocks, mud, and gravel. But after that, I did notice that the traction started to deteriorate quite a bit. Most notably, I had to be more careful whenever the soles became wet – right after crossing a stream or when hiking in rain. It was still manageable, but the traction definitely wasn’t perfect. I guess I would expect this from any trail runner, but not so early.

On my thru-hike, I was hiking in the Pyrenees, where the temperatures often got up to 30 degrees Celsius and it rained only a few days per month. That’s why I was looking for a breathable trail runner. And the Evadict MT2 is very breathable, so my feet didn’t start to develop bad odors that quickly.

I wasn’t concerned with water resistance at all, because I knew I would be hiking in rain very rarely. The MT2 is anything but water-resistant – and I already knew this before choosing them. But what I had an issue with was the fact that once you step in a stream with them, they wouldn’t dry for the next few hours. That’s because the bottom part of the shoe is designed like a small bathtub, and once the inner part is exposed to water, it stays there for a long time. So if I’d accidentally step into a puddle, my hike would be a bit “squishy” for the next few hours.

The main selling point of the Decathlon Evadict MT2 trail running shoes is their cost. I paid 67 EUR for them in my local Decathlon store in Latvia. They’re priced differently in each country, but generally, they’re priced on the lower end. I’ve heard of people getting them for 30-40 EUR on a sale, which is just insane. For the comfort, traction, e.t.c. that this shoe provides, the price is just ridiculous. You can expect to pay 2x or even 3x that for a more popular trail running shoe, which will end up performing very similarly.

The main real issue that I had is that after 500 km (300 miles) the sole became really worn down, so I started feeling all the sharper rocks digging into my feet. That’s why I wouldn’t really recommend using this shoe past this limit on rocky, rugged terrains. For the price that it’s retailing at, I think it’s a superb long-distance thru-hiking shoe, and you can always just buy a new one once this one fails.