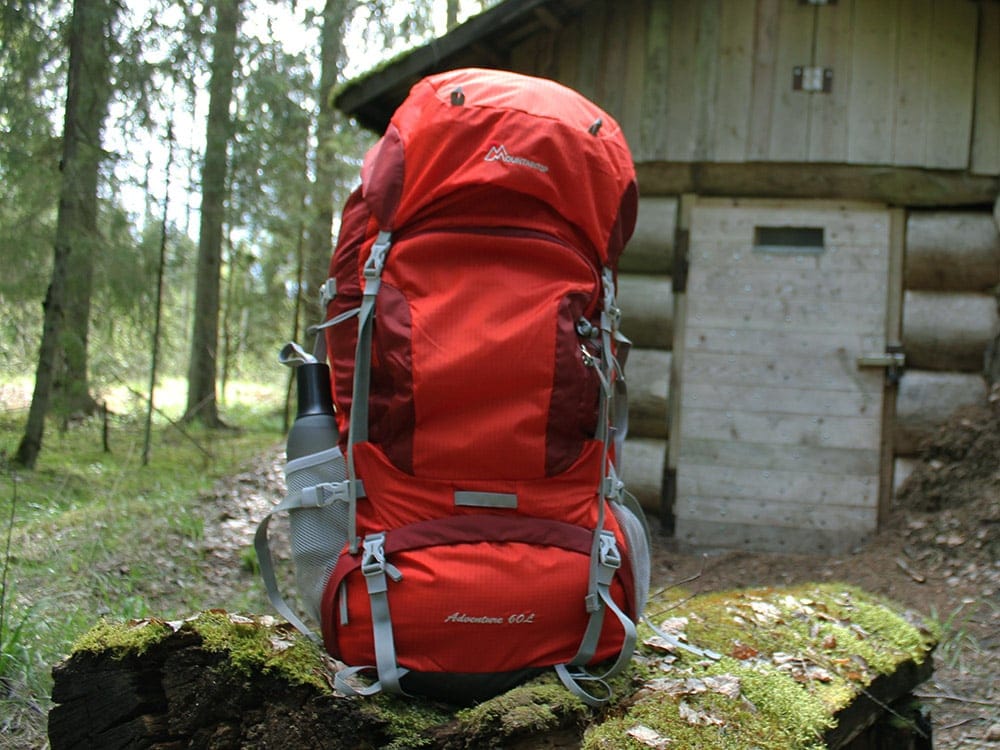 So far, I’ve hiked roughly 40 miles or 60 kilometers with this backpack, so this review will be based on that. Once I’ve done more, I’ll update this review with any new information.

Although this article is about the 60-liter version, it will also be useful if you’re planning to get the Mountaintop 50, 55, 65, 70, or  80-liter internal frame backpacks. They do have some minor differences, like a few extra pockets and straps, but overall they’re very similar. As far as I can tell, they’re the same model, just in a different size.

The total capacity of the main compartment is 60 liters or 3600 cubic inches, but if you extend the straps on the top lid, you’ll get five additional liters.

The Mountaintop Internal frame backpack is made from polyester. The fabric definitely feels on the thinner side, which explains why this pack is so lightweight.

As far as I can tell, all the seams are stitched together pretty well. Nothing seems to come loose, and there aren’t any loose threads. One thing to note, is that the seams aren’t sealed, which means they’ll let through some water.

Although this pack is somewhat water-resistant, it’s not waterproof. In heavy rain, you can pull out the built-in rain cover from the bottom compartment. It stretches over the whole backpack even when it’s packed to the brim. However, I’ve read that they’ve used the same rain cover for the 70-liter and 80-liter versions, so when these packs are packed full, sometimes the rain cover won’t cover everything.

The straps and buckles all around the pack feel somewhat thin and lightweight – like they’re made for long-distance hiking, not wilderness backpacking. They’ve used YKK buckles for the side and back buckles, and unbranded ones on the chest strap and the hip belt. For instance, compared to the Teton 4000, which comes with pretty massive straps and buckles, these feel much less durable. But because they’re made by YKK, they should, in theory, last a long time.

All the zippers on the pack are also made by YKK. They all open and close quite smoothly, and the fabric doesn’t seem to get stuck in them at any point. That said, they aren’t sealed, which means that they’ll leak some water inside the pack.

Internal Frame and Structure of the Pack

The internal frame is removable, and it’s essentially a large plastic plate with a metal pole attached on each side. If you ever need to, you can just take out the internal frame, and throw the backpack into a washing machine.

When it comes to the structure of the pack, there’s a flaw in this backpack in the top lid. At the back, it isn’t sawn to the frame, and instead, it’s attached with adjustable straps. If you don’t pack the backpack full enough, the top lid will slide over the internal frame, and leave an opening for some water to come through.

Even when the adjustment straps are tightened to the maximum, there’s still a gap there, which is very annoying. I also noticed that if you pack something heavy in the top lid, the whole lid will slide too far out to the back, which results in an improperly balanced backpack.

The Mountaintop 60-liter internal-frame backpack is pretty comfortable, but it’s not the most comfortable pack that I’ve worn.

In the back, it’s padded pretty well, and I wouldn’t say that the issues lie there. One thing about the padding is that the channels between the padded panels are too small, and they don’t let through enough fresh air, which results in a pretty sweaty back.

The hip belt feels okay, but I think that it could have some more structure to it. Ideally, you want to have 80% of the weight on your hips. So having a nicely padded and a pretty massive hip belt is pretty important in my opinion. Unfortunately, this one falls a bit short.

The Mountaintop internal frame backpack comes with an adjustable torso length. I measured that the torso length is adjustable from 16 inches to about 20 inches. I’m 18 inches in torso length and I keep it on the third-largest setting.

One thing that I read a lot in other reviews, is that the load lifter straps seem to come loose for a lot of people after about 30 minutes of wearing the backpack. I haven’t noticed this issue myself, but I can see how it could happen. They seem to move around very easily.

And lastly, this pack also has an adjustable chest strap, both in height and width, that also has a whistle in the buckle. I tried testing out the whistle and it doesn’t seem to work that well.

But don’t get me wrong, although there are a lot of issues regarding straps and comfort, this backpack is still somewhat comfortable. For lighter loads, it does a pretty solid job.

At the bottom of the interior, there’s a sleeping bag compartment that you can access separately from the bottom. It’s divided from the main compartment with a fabric sheet, which you can open up if you want to.

And now, let’s cover the exterior of this backpack. You get a large pocket in the lid, which, as I already mentioned earlier, slides too far off to the back if you pack something heavy inside. On top, there are four loops where you could attach a climbing rope, a sleeping mat, or something similar. Just note that there aren’t any adjustment straps included there, only four loops.

On each side, this backpack has two compression straps, which can be used to tighten something long, like an ax, a tripod, or something similar, and a large zippered mesh pocket for your water bottles. You’ll also find these tightening loops on each side, which are also meant for securing something long to the pack.

One thing that I really like about this pack, is that it has a large pocket in the middle of the pack, which I use pretty often. You don’t usually get these in other packs, and I like it because it’s easy to open, and very large. I usually store my snacks, electronics, and other items that I’d need to access quickly.

And one thing that I don’t like about this backpack, is the two pockets on the hip belt. I was excited to have these at first, and upon first impressions, they seemed really spacious and easy to use. However, when you’re wearing the pack, the shoulder straps get in front of the pockets and cut off about one-third of the size, which makes it very, very hard to put in my phone in there. Also, they’re too far out to the back, so they’re hard to reach into.

In terms of brand reliability and warranty, you don’t get a lot with the Mountaintop internal frame backpack.

Mountaintop is essentially a Chinese manufacturer, with a website that looks like it was made in five minutes. They mention some kind of warranty, but it doesn’t mention what exactly it covers and for how long.

Essentially, if anything breaks on the pack, you’re on your own, except if you’re still able to return it to Amazon.

And now, let’s get into my final verdict on the Mountaintop 60 liter internal frame backpack.

Let’s start with the pros. First of all, I really like the lightweight aspect of this backpack. Although the hardware and the fabrics all feel pretty thin, they don’t look like they’ll break anytime soon.  The fabric is also water-resistant, and this pack comes with a rainfly cover. Another thing that I like is that it has a large pocket in the middle of the pack, which I use quite often.

They’ve used YKK zippers and YKK buckles for an affordable pack, which should hold up really well. And lastly, I like the design of this pack. In my opinion, it’s a pretty good-looking pack.

But as much as I want to like the Mountaintop internal frame backpack, there are a lot of things that make me want to stick to other packs instead. First of all, the top lid isn’t sawn to the main frame. Instead, it’s attached with adjustable straps, and there’s always a gap between the lid and the internal frame, which looks awful and lets in water.

Another thing that I don’t like is the shoulder straps. It’s very hard to adjust this pack to get it to carry most of the weight on the hips. So if you’ll be carrying heavy loads, you might want to get another pack instead.

And lastly, I don’t like the pockets on the hip belt. They’re too far out to the back, and the shoulder straps get in front of them and cut down their size to about two-thirds.

So would I recommend this pack? If you usually aren’t carrying heavy loads and you’re looking for something lightweight, cheap, good-looking, and minimal, then the Mountaintop is a solid choice.

But you’ll be carrying heavy loads, then this backpack just won’t cut it. It’s not the most comfortable pack out there, and there are a few design flaws that are just there because this pack wasn’t tested enough before being released. With a few updates from Mountaintop, this pack could become the best affordable internal frame backpack. It has the potential, but it’s just not there yet.