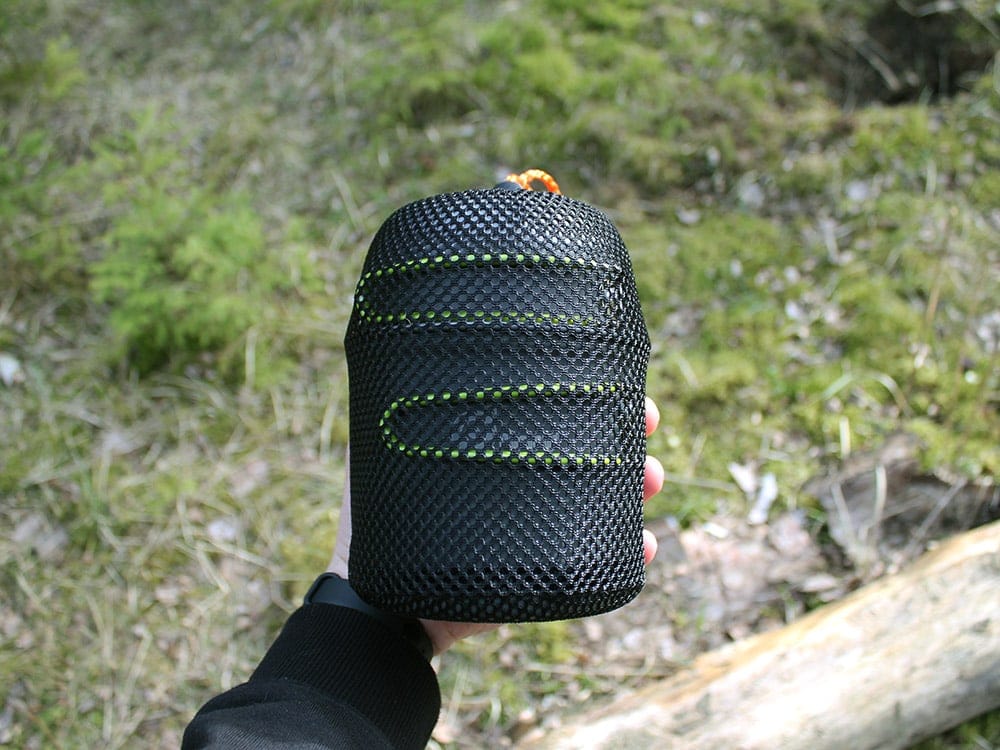 I purchased the Odoland camping stove kit back in 2020, and back then, it cost only 20$. I’ve since upgraded to a more expensive kit that costs about 100$ in total, but I still use this cheaper kit occasionally on shorter hikes. It’s a good kit, especially for its super affordable price.

This particular one is made by “Odoland”, but you can find other really similarly-looking ones branded under other brands on Amazon, such as “G4Free”, “Aotu”, “Extremus”, “TWOOZO”, and others. My guess is that it’s a camping stove kit offered on Alibaba, and a lot of people are private labelling it under their own brands.

If you buy this kit under a different brand, the total setup will be slightly different. With the Odoland kit, I got:

Personally, I’ve never used the stainless steel cup. In my opinion, it’s too large, heavy, and bulky. As a substitute, I purchased a set of two foldable silicone cups, where I make my coffee. I also pretty much never use the gas canister stabilizer attachment, because it just adds unneeded weight. I can always find a level spot for setting up my camping stove without using the attachment.

Although the set of utensils is okay, I also substituted it with a lightweight titanium spork. It didn’t save much weight, but I personally thought that the original set of utensils felt a bit clumsy, and they were harder to wash because stuff got into the areas where the utensils fold. Plus, the foldable knife is pretty much useless anyway, since it isn’t sharp. Still, I bring it when I’m traveling with my friends who don’t have dedicated camping utensils – they’re still much more effective than bringing a regular spoon and a fork.

One thing that I really like about this kit is that you’re able to fit a regular, 230g gas canister inside the pot. There’s usually some room left for the stove and I personally also keep a small kitchen towel in there.

The Odoland camping stove kit comes with a fabric mesh bag, so you can fit everything inside the pot and have everything packed in a single bag. In a packed state, it measures 6.5 x 5 inches (16 x 13 cm), so it isn’t too large – smaller than JetBoil.

In total, everything weighs 20 oz (560g), which is pretty much, but still pretty acceptable for a cook set that’s so cheap. Also, you probably won’t be using the stainless steel cup, the foldable stainless steel butter knife, and the gas canister balancer. Without all of that, it weighs 15 oz (440 g), which isn’t too much. It’s just a few grams heavier than JetBoil, and it essentially costs 1/5th of the price.

One thing that really makes this set stand out is the camping stove. When I first received it, I remember using it and being amazed at how rigid it felt. Today, I’ve upgraded everything from this set, except the stove. In my opinion, this set is worth buying just because of this camping stove.

In fact, this stove is also sold separately by other Amazon brands (for example, the AOTU portable camping stove), and it’s a really popular option for thru-hiking. It’s lightweight, durable, really small, super cheap, and it does the job just fine. It’s not the most efficient stove though – When I tried boiling the large pot full of water (800 ml), it reached a boil in about 8 minutes, which isn’t too fast. But out on the trail, you’re never really boiling that much, and it can boil 400 ml in about 3-5 minutes, which is fine.

The only issue that I have with it is that at some point, the spark igniter broke. So today, I have to also carry a small Bic lighter to start the fire. Another issue is wind – you do have to set it up behind a rock, a tree, or you can use your backpack when the wind is picking up. Otherwise, you have to relight it after every large gust of wind.

In a small fabric bag, you’ll find three folded stainless steel utensils – a fork, a knife, and a spoon. In my opinion, the knife is pretty much useless, because it’s flimsy and it isn’t sharp, so I always leave it at home. The spork and knife are useful, but they do feel a bit flimsy, so I upgraded my new setup with a single titanium spork.

That said, it wasn’t a huge upgrade, because Odoland’s fork and spoon are both somewhat lightweight, and they do the job just fine. So if you’re looking for a cheap setup to get you started, you don’t need to upgrade to something better right away.

One thing that I also don’t really use is the plastic gas canister attachment, which stabilizes everything while you’re cooking something. I can pretty much always find level ground, so in my opinion, the attachment is something that you can leave at home.

When I first got the set, I tested everything, and I remember that while I was putting on the gas canister attachment, I broke off one of its legs. It’s made from brittle plastic, and it’s a tight squeeze to get it on, so it wasn’t really a big surprise that it broke off. But again, it isn’t a big issue, since I’m never using it anyway.

With this kit, you get two pots, 300 ml, and 800 ml. I usually just boil everything in the larger one and use the smaller one as a lid in order for it to boil faster. I’ve found this system to be really useful for cooking for two people. You don’t need to carry another bowl – you can just cook everything in the larger pot and when you’re done, put half of it in the smaller one. I quite often use them for boiling pasta or quinoa for 15-20 minutes straight, and although some stuff sticks to the bottom, you can get it off fairly easily in a nearby stream.

Both of them also have long handles, which are really useful for taking the pot off when it’s hot. Ultralight pots usually have small handles, so you can burn your hands.

I found one person who said that these pots contain lead, but I haven’t made sure whether that’s true or not. The manufacturer states that they’re built from aluminium, which supposedly is fine to use for cooking pots.

In Value, the Odoland cookware set easily beats most of its competitors. Cooking your own dinner is an essential part of enjoying the outdoors, and for a bit over 20 bucks, you can get everything you’d need to get started. Theoretically, you don’t get a bowl, but you can just eat straight out of the pot, which will save some weight.

If you want a titanium pot, a titanium spork, and an ultralight stove, you’re easily looking at 80-100$ or maybe even more. That said, you can also find similar camping stove sets from other cheapo brands on Amazon, and I personally think that most of them are fairly similar in terms of durability and value.

Odoland doesn’t offer any warranty for this camping cookware kit. And honestly, it doesn’t even matter, because sending something for exchange would be more expensive than buying a new set. So in reality, you’re only backed up by Amazon’s window of 30-day returns, so if you see something wrong with your kit, return it straight away.

I personally think that the Odoland camping cookware kit is a really great option for someone who’s just getting into hiking. You really don’t need to purchase a lightweight set above 100$, when you can get everything you’d need for just 20-30 dollars. And it’s not like the Odoland set is way much worse than the ultralight options – yes, it’s slightly heavier, but it performs just as well (almost) and doesn’t take up too much space in my backpack.

After using it for two years, and even taking it on my 36-day thru-hike, everything still works (except the spark push-button igniter, which eventually stopped working, and now I have to use a regular lighter to light the gas). I also pretty much never use the stainless steel cup, the gas canister stabilizer attachment, and the foldable butter knife. But other than that, it’s a really great set.