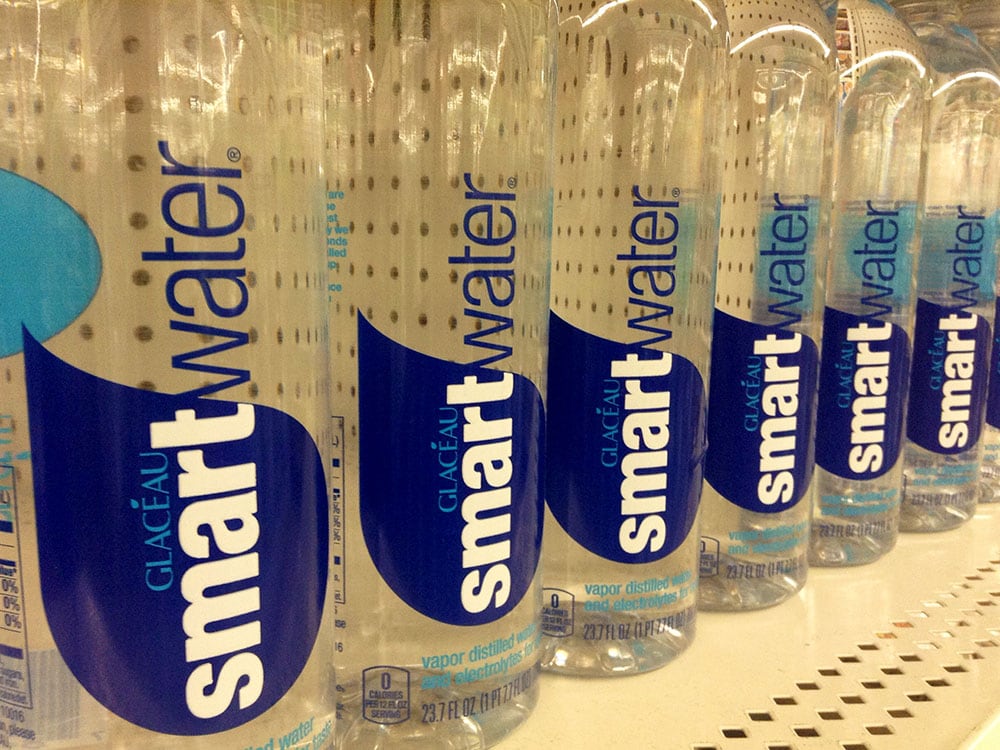 On my 36 day thru-hike in Spain, I didn’t use a Smart Water bottle. Instead, I chose a 2 l Coca-Cola bottle in combination with a 1.5 l regular water bottle. I used the Coke bottle because it was the only one that had a standard cap where I could screw on my water filter – others were slightly wider. They use a wider cap in Spain because less plastic is needed to manufacture it.

And that got me thinking… Is reusing single-use water bottles when thru-hiking really safe for your health? Surely the plastic would degrade over time and chip off an unhealthy amount of microplastics, right? I did a lot of research about this topic, and in this article, I’ll share my findings.

We’ll mainly talk about Smart Water bottles (because that’s what most people are using) but we’ll also talk about using single-use water bottles in general.

Why So Many Thru-Hikers Use Smart Water Bottles

Weekend Warriors tend to stick with Nalgene bottles and water bladders. But when you’re thru-hiking, every gram counts, so most choose regular plastic bottles instead. They’re much lighter, they’re very easily replaceable at any supermarket, and you can use them with most screw-on water filters, such as the Sawyer Micro Squeeze or the Mini.

Specifically, people in the states and the UK tend to use Smart Water bottles because they’re made from a thick plastic that doesn’t break down that easily. Some people even reuse the same Smart Water bottle for over a year. I live in Europe, so we don’t have them here, but we can find similar ones, such as ones from Coca-Cola, San Pelegrino, e.t.c. Speaking of that, Coca-Cola owns Smart Water, which explains why their bottles are somewhat similar.

Smart Water bottles are available almost anywhere in the US, and the most common capacity is 1 liter. They weigh just 1.2 oz (34g) when empty and they last a pretty long time, compared to other disposable water bottles because the plastic doesn’t wrinkle as easily. The thread used on them is compatible with all the Sawyer water filters, which is why they’re used so much by the hiking community.

Smart water bottles specifically are made from 100% recycled plastic. And while that’s good for the environment, is it good for your health? Doesn’t this just mean that they’ll degrade quicker when used for extended periods? Let’s look at all possible health risks individually down below.

Smart ( And Almost All Other) Water Bottles Are BPA Free

Smart Water and almost any other water bottle is made from PET (polyethylene terephthalate) plastic. PET plastic is BPA-free, which means that it doesn’t contain Bisphenol-A, which has been at the center of controversy over disposable plastics. This chemical was widely used since the 1960s and has been banned only since 2013. It was proven that it would slowly leak into the water from water bottles over time.

For now, It’s only banned in baby bottles. But since this ban, almost all single-use plastic bottles are now BPA-free. So you shouldn’t worry about BPA in Smart Water bottles or any single-use bottles for that matter.

Smart Water specifically is made from 100% rPET, which stands for recycled PET. I looked online if it’s any different than regular PET and it looks like both plastics are almost identical and both of them are approved by the FDA to use in food containers. The reused plastic isn’t as strong originally, so to combat this, they add additives that make it almost identical in physical properties to Virgin PET.

Back in 2018, a study concluded that several brands of bottled water contain a worryingly-large amount of microplastics. At the time, this became a headline around many news outlets. However, we aren’t interested in the water itself – as hikers, we’re just interested in whether the water bottle itself releases microplastics over time.

I found another study that tested exactly this in 2019. They tested single-use bottles from various brands by screwing/unscrewing the cap multiple times and squeezing the bottle multiple times. And the results were quite interesting. The squeezing of the bottle didn’t seem to release almost any microplastics as the walls of the PET bottle are very durable. However, screwing/unscrewing multiple times resulted in a significant release of microplastics, which happened due to the friction of the cap and the bottleneck.

The results showed a considerable increase of MP particle occurrence on the surface of PET and HDPE material (bottlenecks and caps) after opening and closing the bottles. After 100 times the effect was impressive, especially on caps.

I’ve noticed this on my own as well. I was using my coca-cola bottle for about three weeks straight when thru-hiking, and towards the end, I noticed small white particles floating around in the water. At first, I thought it might be from contaminated water but I realized that they’re coming from the bottle itself! They were there even after filtering the water with my Sawyer Micro Squeeze water filter. After that, I started switching to new bottles every week.

Other Chemicals Leaking Out of Plastic Bottles

Another concern of PET plastic is Antimony, which is a toxic chemical that is used in the production process. A study found that in high temperatures, PET bottles release a large amount of Antimony. And if kept at high temperatures for extended periods of time, the Antimony levels can exceed levels safe for health.

The only “real” threat that has been proven to be bad for human health is the bacterial buildup in single-use water bottles. As soon as a disposable water bottle is opened, germs get in there through our mouth. And it’s the perfect environment for bacteria to grow, being warm and wet.

When thru-hiking, usually you have two bottles – one for dirty water and one for the clean one. I would recommend drinking straight from the water filter whenever you can to combat this issue, rather than always filtering clean water in your second bottle. If you have some soap, you could also wash the bottle every now and then to prevent bacterial buildup.

When Should You Change Your Smart Water Bottle to a New One?

I’ve heard of some people hiking with the same Smart Water bottles for years. However, I wouldn’t recommend doing this because reusing the same water bottle over and over again releases a large number of microplastics, and it increases the bacterial buildup unless it’s washed with soap.

It’s advised to switch to a new disposable water bottle every 1-2 weeks when thru-hiking.

Is It Safe to Reuse Other Disposable Water Bottles for Hiking?

We mainly talked about Smart Water in this article but this also applies to other water bottle brands, as they’re almost identical. Reusing the same disposable water bottle when thru-hiking is safe but you should wash it with soap every now and then or switch to a new bottle every 1-2 weeks. Another concern is microplastics, which are released mainly from opening and closing the bottle cap multiple times, but so far, microplastics aren’t proven to be unsafe for our health.

Reusing Smart Water bottles when thru-hiking is generally safe. However, you should switch to a new bottle every 1-2 weeks if you’re concerned about microplastics. If not, you should at least wash the bottle with soap every now and then to prevent bacterial buildup or drink directly from your water filter, which is screwed on the bottle itself.