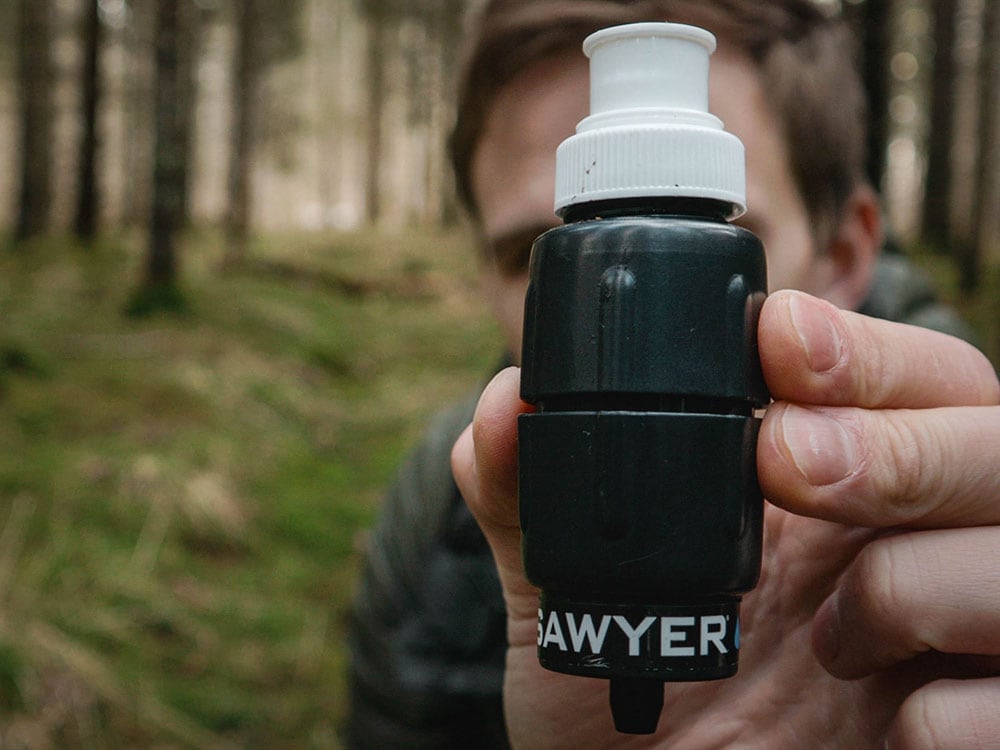 The Sawyer Micro Squeeze filters out 99.99999% bacteria, 99.9999% protozoa, 100% microplastics, and any other particles (dirt, ground, e.t.c.) over 0.1 microns. What it doesn’t filter out is particles under 0.1 microns, which means it won’t filter most chemicals that dissolve in the water, heavy metals, pesticides, and viruses.

The way that the Micro Squeeze works, is that when you pass the water through the water filter, it goes through multiple tiny micro-tubes. The walls of these tubes don’t let anything through larger than 0.1 microns, and you can’t burst them with the pressure from your hands when squeezing the pouch, so the water is perfectly safe to drink.

What this means in real life, is that you should only use it in places where there’s little to no potential for chemical or agricultural waste. You shouldn’t use it near large farms, where there could be viruses from the farm animals or pesticides from the crops, and near industrial areas or places with a lot of trash, where there could be some toxic waste. When you’re out hiking, usually, most water sources don’t fall within these categories. Most rivers, lakes, ponds, springs, and even remote puddles are safe to filter with the Sawyer Micro Squeeze.

A lot of people like to use the Micro Squeeze only as an emergency, last-resort option. That’s because they don’t fully trust that the filtered water is safe to drink. But you should always use it on any hike longer than one day with no fresh, drinkable water sources nearby. There’s no need to carry large amounts of water if you can just filter some water along the way.

In reality, a single 16 oz / 500 ml pouch isn’t enough for most overnight uses. When you’re setting up a camp, you’ll probably need about 2-3 liters of water if you’re cooking up some food and you aren’t hiking alone. You could live with a single 16 oz / 500 ml pouch, and bring one or two water bottles for dirty water with a regular, 28mm thread cap, as the Micro Squeeze uses the same standard thread.

But a better option would be to purchase a bundle of three 32 oz / 1 liter Sawyer pouches (Which cost very cheap by the way) because they’re lighter than plastic bottles, they’re collapsible when not used, and they’re easier to squeeze when filtering water. We usually carry the Sawyer Micro Squeeze with two 32 oz / 1 liter Sawyer pouches for dirty water, and one 750 ml regular water bottle for clean water.

How to Use the Sawyer Micro Squeeze Water Filter

The Micro Squeeze is pretty straightforward to use. You just fill up the Sawyer pouch with dirty water, screw on the Micro Squeeze, and with a gentle squeeze out comes clean water. You can drink straight from the water filter or pour the clean water into a clean water bottle.

When you’re filling up the Sawyer pouch, you need to blow it up first, so use your palm to clean the cap from most dirt and blow it up using your mouth. Try to be careful when doing that, because the cap is most likely contaminated from dirty water. When filling up the pouch, try to get as clean water as possible, because the filter won’t get clogged up as fast and you won’t need to backflush it that often.

Although in reality, we avoid doing this, theoretically, the Micro Squeeze filters out any water that isn’t contaminated with chemicals, heavy metals, or viruses. So we tried filtering water from a very dirty puddle in the middle of a forest, making sure to stir it up before filling up the pouch, just to make things more interesting.

The filter did get clogged up from this pretty quickly, but the Micro Squeeze did its job. We drank almost a full bottle of filtered water, and we didn’t experience any problems afterward. In taste, the water didn’t differ from regular tap water, but the filtered water did differ in color, being in a yellowish tint. The yellow tint comes from tannins, which are caused by the breakdown of vegetation, and they’re completely safe to drink. Unfortunately, the Micro Squeeze can’t filter out the tannins, which means that the filtered water will look unpleasingly yellow but it’s still safe to drink.

After about nine months of use with occasional backflushing, the flowrate on our Sawyer Micro Squeeze measured at about 80 seconds per liter of water, which is a pretty good result. A nice improvement from the Sawyer Mini, which, at best, filters one liter of water in 120 seconds.

We haven’t tested the full version of the Sawyer Squeeze yet, but OutDoorGearLab places it at 40 seconds per liter, so the Micro Squeeze definitely is slower. Honestly, from our own experience, having a flow rate faster than 90 seconds per liter is a nice feature to have, rather than a necessity. When you’re filtering with the Micro Squeeze, it doesn’t feel frustratingly slow.

To keep the flowrate at the maximum, you should regularly backflush the Sawyer Micro Squeeze. From our experience, you should backflush it after every 5-10 days of use. For instance, backflush it once every five days if you’re hiking every day, or after every two to three overnight hikes. This is usually enough to keep the filter from clogging up, but you may need to backflush it more often if you’re using it in very contaminated water sources.

To backflush the Micro Squeeze, you need to fill up the provided syringe with CLEAN water, put it against the clean end of the Micro Squeeze, and push it as hard as you can. Repeat that about three times and the flowrate should be restored to optimum levels.

If the flowrate drops dramatically, even after regular backflushing, the nano-tubes are probably clogged up with minerals. We found a guide on Sawyers’s website that addresses this problem. You need to hold the water filter in vinegar mixed with hot water (ratio 1:5) for about one hour, and then backflush the filter with all of the vinegar water. For us, it restored the flowrate back to the factory levels. We didn’t do it on the Micro Squeeze because the flowrate is still very fast but on the Sawyer Mini, it improved the flowrate from about 5 minutes per liter to 2 minutes per liter.

About the Sawyer Water Pouches

A lot of people don’t like to use the original Sawyer pouches, because they’re clunky (they aren’t too flexible,) they can be hard to fill up, and they can burst very easily. We did burst the original 16 oz / 500 ml pouch at the beginning because we used to squeeze it too hard. After getting some advice on various forums, we found out that you shouldn’t be squeezing them so hard because the water doesn’t come out faster anyway. Since we stopped squeezing them so hard, we haven’t burst any more pouches. Honestly, they aren’t perfect, but if you’re careful, the Sawyer pouches will last a long time, and they aren’t too expensive anyway.

Using the Micro Squeeze In Winter

We were really excited to test the Sawyer Micro Squeeze water filter because it promises the flowrate of the full Sawyer Squeeze version while being as light and compact as the Sawyer Mini. And while the flowrate isn’t as good as on the full version of the Squeeze, it’s definitely much faster than the Mini. The Micro Squeeze is about the same size as the Mini, fitting in our palm, only a bit heavier but honestly, the extra 0.95 oz / 27 grams don’t make much difference anyway. We think that the Sawyer Micro Squeeze is a really solid option if you’re looking for something cheap, lightweight, compact, and with a fast enough flowrate.