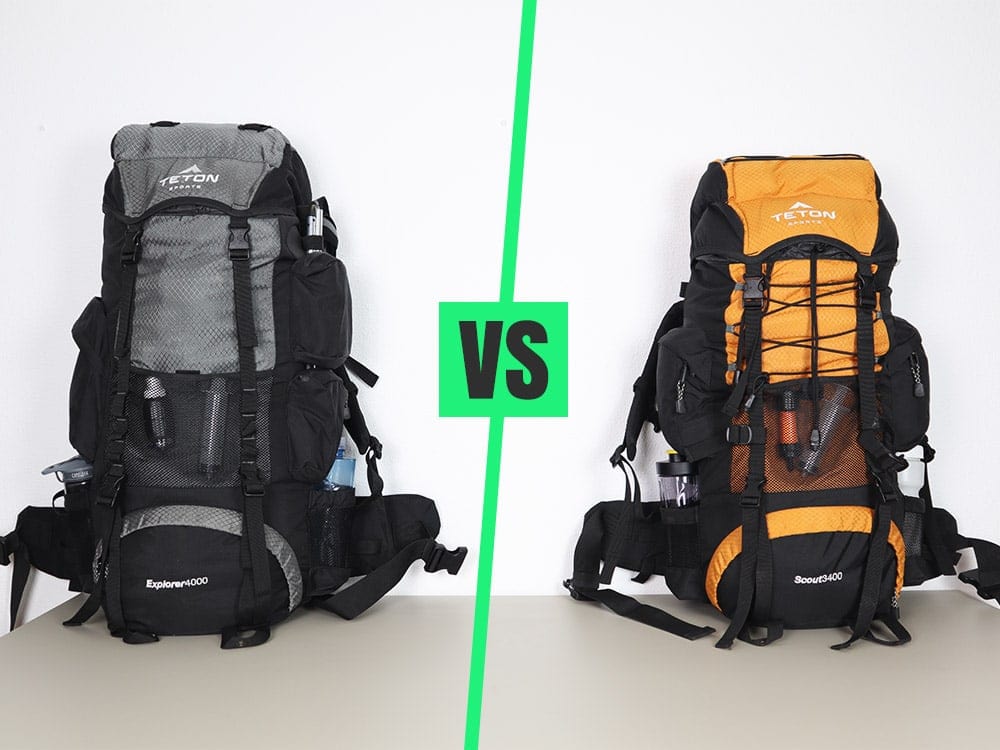 As a serious hiking enthusiast, often going on hikes for multiple days at a time through various mountain ranges, forests, and long-distance trails, I require a backpack that won’t let me down. On my quest to find the best affordable internal frame backpack, I’ve purchased and tested several options in the affordable price range, and Teton Sports seems to be the best option (also, one of the most popular ones.)

But which one is better – the Teton Sports Explorer 4000 or the Teton Sports Scout 3400? I’ve hiked over 100 kilometers with each one and made in-depth reviews for both of them. Although they’re very similar, there are some differences between both, which I’m going to talk about in this article. While the Scout 3400 might be better for some, the Explorer might be better for others. It really depends on your own needs.

For ultralight or even regular lightweight hiking 400 grams is a lot, so the Scout 3400 is clearly a better choice. But then again, both of them aren’t too light to begin with. It’s not uncommon for 40-50 liter internal frame backpacks to weigh just over 2 lbs / 1 kg. So realistically, if you’re getting the Scout 3400 or the Explorer 4000, you’re compromising on a lot of weight.

Comparing the Volume in Real Life

But what exactly does the ten-liter difference equate to? To show you an example, I’ll pack the Teton Sports Explorer 4000 full of hiking gear, and then I’ll try to stuff the same amount of gear in the Scout 3400 and see how much gear is left behind.

For this test, I’ll be using the following gear:

I packed the Explorer 4000 as full as I could. However, you could still add something to the exterior of the pack, such as two rolled-up sleeping mats (one attached to the top of the bag and one at the bottom) and something long behind the pockets on one side of the pack, like an ax or a tripod.

After that, the next step was to try to pack the same items in the Scout 3400, and see how much gear wouldn’t fit.

I was able to squeeze everything mentioned above in the Scout 3400, except the ultralight tent, and a sleeping bag. Still, there was space for everything that I’d need for a few-day trip, with some free space for extra food and other extras. I packed an additional water bottle, full-length hiking pants, another fleece jacket, and another rain jacket just to pack the bag full. In reality, this would be the extra space for food and other items. Also just like on the Explorer 4000, you could attach more items to the exterior of the pack, either to the bottom of the pack with the included adjustable straps or to the top with the included bungee chords.

So what’s the conclusion? If you aren’t carrying extra bulky gear, the Scout 3400 is large enough for several-day long hiking trips. I’d recommend the Explorer 4000 only if you carry a lot of gear, or if your gear is very bulky. When hiking, smaller and lighter is always preferable when possible.

Both of these backpacks are also adjustable in torso length (the length between your shoulders and hip bones.) It’s done with a massive velcro strap that attaches the shoulder straps to the back of the backpack. You can regulate the height, and the system is identical on both backpacks. The only difference is that they’re adjustable in different lengths. On the Scout 3400, the torso length is adjustable between 15 – 19.5 in / 38 – 50 cm, and on the Explorer 4000 between 16 – 20 in / 40 – 50 cm. The official measurements are slightly different, and I measured these ones myself. For comparison, I’m about 6 foot 1 / 185 cm in height, and my torso length is about 18 in / 45 cm, so both of them fit me nicely on the medium setting. Nailing the torso length is really important for properly distributing the weight on the pack, otherwise, your shoulders will hurt.

When all the straps and buckles are properly adjusted, both of these packs are very comfortable to wear, even with heavier 20kg / 44 lbs loads. That’s because both of them come with very robust hip belts and there’s a lot of padding all over the backside of the pack.

I’ve only noticed two issues in terms of comfort. The first one comes only with the Explorer 4000. On hot days, your back will sweat a lot because there’s padding all over the back part of the backpack, so there’s no ventilation. On the Scout 3400, there’s a gap in the middle, which doesn’t compromise any comfort and allows more ventilation.

The second issue is that both of these backpacks tend to squeak after your back becomes sweatier. At the point where the shoulder straps attach to the back of the backpack, the velcro strap rubs against a different fabric, and it results in a faint squeaking sound. You get used to it, but for me personally, it’s slightly disappointing because I’m always trying to stay quiet to see some wildlife.

Comparing the Fabric, Seams, Zippers, Straps, Buckles, and Other Hardware

In terms of fabric, straps, buckles, and other hardware, the Scout 3400 is basically identical to the Explorer 4000. They’re both made from thick, 600D polyester, which I tested to be very water-resistant. Though, the seams aren’t seam-sealed, which means that they’ll let through some water anyway. But don’t worry because both of them have waterproof rain covers included at the bottom of the pack. Other hardware, such as zippers, straps, and buckles are all very thick, massive, and seem very durable.

So far, I haven’t had any problems with quality, except for one issue with the Explorer 4000. When I received the pack, a single seam in the middle of the pack was already coming loose. It looks like an obvious production defect. So far I haven’t contacted Teton about this, but it should be covered under their Lifetime warranty for defects and materials. But other than that, the stitching seems to be well-done everywhere else.

The only difference in the interior is that on the Explorer 4000, the internal frame is attached from the interior, and on the Scout 3400, it’s attached from the exterior of the pack. The internal frame consists of two aluminum rails. If you ever need to take them out, it’s much easier to put them back inside in the Explorer 4000. On the Scout 3400, it’s a pretty difficult job to do.

The most notable differences between the Scout 3400 and the Explorer 4000 lie in all the exterior features. On the top, the Explorer 4000 is equipped with two tie-down straps, which are useful for attaching a climbing rope or a sleeping mat. However, the Scout 3400 comes with a slightly different setup -tie-down bungee chords all over the top and the middle part of the backpack. They’re too tight to attach a sleeping mat, but you can put a rain jacket or a sweater there.

The sides are fairly similar with a few exceptions. The Explorer 4000 has three side pockets, and the Scout 3400 only two – one on each side. Furthermore, the pockets on the Scout 3400 are fully stitched to the pack, while on the Explorer 4000, they’ve left a gap behind the pocket, which is meant for sliding something long underneath it. Both packs have a zippered mesh pocket on each side for water bottles.

They’ve also implemented systems for storing trekking poles but there are some major differences between them. The Scout 3400 comes with regular elastic straps on each side, while the Explorer 4000 has a larger tightening strap on one side, which you can manually secure. The system on the Explorer 4000 is much better for securing my Black Diamond trekking poles. On the Explorer 4000, they’re safely secured but on the Scout 3400 they could fall out at any time, because the elastic loops are spaced too far apart, and you aren’t able to manually tighten them.

In other exterior features, the packs are identical. They both have a zippered mesh pocket in the middle of the pack, and at the bottom, there are additional tie-down straps for attaching a climbing rope or a sleeping mat.

Final Verdict: Which One Should You Choose?

Both of these backpacks are very solid options in the affordable price range. They do compromise a lot on the weight, but in return, you get a beefy, well-made backpack, that’s very comfortable to wear, and is even backed up by a limited lifetime warranty. You can find more affordable packs that are lighter, but usually, they’ll either be very uncomfortable, or they’ll lack in quality. While I’ve hiked only 100 kilometers with each pack, a lot of people have been using the Teton Sports Scout 3400 and the Explorer 4000 backpacks for many years without any issues.

Personally, I prefer the Scout 3400 over the Explorer 4000. The reasoning is simple – it’s 400 grams lighter, yet it can still easily fit everything I’d need for multiple-day trips. And there’s still some space left. The improved ventilation on the back over the Explorer 4000 doesn’t hurt either. The only thing that bothers me is the system for securing trekking poles to the side of the pack. On Explorer 4000 it’s much more secure and easier to use. That said, if you’re very tall, or if you’re usually bringing very much gear with you (hunting gear, packs of beers, e.t.c.,) then you should probably opt for the Explorer 4000. It’s basically the same pack, just larger, and with a few minor differences here and there.