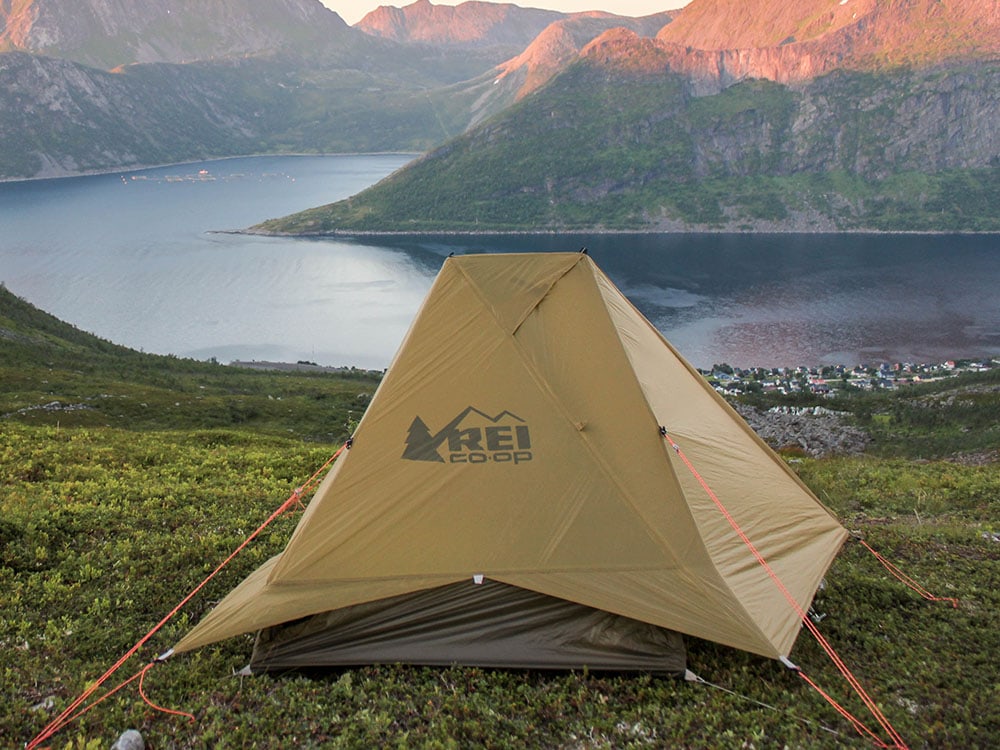 We’ve been testing the Rei Co-Op Flash Air 1 ultralight tent for 11 months now by using it on various trekking conditions in Latvia, Finland, Norway, and Spain. We were very excited to test it out because it’s one of the cheapest (if not THE cheapest) truly ultralight tents that you can find. So far, we’ve slept about 20-30 nights in this tent, so this by no means isn’t a “first impressions” review.

If you’re looking to save some space in your backpack, then you’ll be impressed by the Flash Air one’s tiny packed size. Together with the stakes and poles, it’s about 16 x 6 inches / 40 x 15 cm in size in a packed state. But if you pack the stakes and poles separately, you can easily compress the rest of the tent to about 6.3 x 8 inches / 16 x 20 cm, which equates only to about five liters.

All included (together with the poles), the Flash Air 1 weighs 26.5 oz / 750 g. Because it’s a trekking pole tent, if you bring just one trekking pole you can leave the tent pole at home, which reduces the weight to 24.7 oz / 700 g. If you strip the tent to only the essentials and remove all the storage bags and the repair tube for the tent pole (included with the tent) the total weight is reduced to 23 oz / 650 g, which is very impressive considering that this tent is priced so affordably.

The Rei Flash Air 1 comes with five DAC Aluminum stakes, weighing 2 oz / 59g for all five stakes. All of them are needed to set up the tent, and they feel quite durable. At least, we haven’t bent or broken any so far, and we’ve used them in the winter as well when the ground was frozen.

The tent itself is made from ripstop nylon in the fly and the floor, and nylon mesh in the remaining parts. As with all ultralight tents, the fabric is very thin and feels like it could be punctured fairly easily. That said, so far we haven’t had any rips or punctures. This tent doesn’t come with a footprint underneath unless you decide to purchase one separately (Highly advisable if you want to extend the lifespan of the tent,) and even without the footprint, the floor is still in pristine condition.

Similar to the tent stakes, the poles are also made from DAC aluminum, and we haven’t experienced any issues with them so far.

As with most R.E.I. products the seams are finished in high quality, with no loose threads or imperfect stitches. All of the seams are fully sealed, and they don’t appear to be leaking through any moisture.

When we first received the REI Flash Air 1 and set it up for the first time, we thought that the whole process was pretty complicated. But after using it for a while, we’ve gotten used to it, and now it takes only a bit longer compared to setting up a basic freestanding tent.

Because it’s a trekking pole tent, it’s pretty hard to set up in a way that it sits straight. It’s very easy to balance slightly to the left or to the right, and if you do that the gap underneath the vestibule can be too large or too small and the fabric won’t be tensioned evenly. But once you learn to balance everything out, the whole process becomes very straightforward. You just have to remember to spread the tent stakes out evenly and to get the gap underneath the vestibule just right.

One benefit of the REI Flash Air 1 is that you can set it up when it’s raining, and the inside won’t get wet. Freestanding tents usually have a separate inner tent, which isn’t waterproof and it has to be built first but with the Flash Air 1, there’s only a single wall.

Although on paper the Flash Air 1 sounds fairly roomy, measuring at 88 inches / 223 cm in length, 35 inches / 89 cm in width in the top end, 27 inches / 68 cm in the foot end, and 43 inches / 106 cm in height, in reality, it isn’t much larger than a bivy. The top and the side walls on the Flash Air 1 are angled pretty tightly, which reduces the usable ground space.

To compensate for the tight angles, there’s another pole in the foot end, but it doesn’t do that much and you will brush against the inner walls of the tent occasionally. In reality, it’s a somewhat tight fit, at least for people measuring 6’1 / 185 cm in height or above. That said, if you sleep without moving around, you should be able to avoid brushing against the walls too much. Sitting up isn’t really an option in this tent unless you’re okay with touching the ceiling of the tent with your head.

But don’t get us wrong – while the livability isn’t perfect in the Flash Air 1, it provides enough room to provide a basic overnight shelter without any fancy extras. (Unless you count the absolutely amazing view through the wide vestibule opening as an extra.)

In terms of organization and storage, R.E.I. included a small pocket near the vestibule, which really is only large enough to hold all of the stuff sacks (for tent, sleeping bag, mat, e.t.c.) and a small fabric loop on the top for hanging a lantern. A hook would have probably been a better choice because not many ultralight hikers are interested in carrying an extra lantern and instead just use their headlamp, which could be hung on a hook but not on a fabric loop.

The vestibule is large enough to hold most of our gear but we usually keep everything inside, on the far end of the tent. That’s because the gap underneath the vestibule is pretty large, and in large winds, it will blow in some rain, which means that our gear could get wet. If you put your sleeping mat right next to the entrance, you can stuff the rest of your gear along the far edge of the tent.

In terms of rain resistance, the REI Flash Air 1 does a really good job. It’s fully waterproof and will start leaking only once you spend several hours in the pouring rain (like all ultralight tents.) The team behind backpackinglight.com measured the water-resistance to be 1800-3000mm H20, which means that it’s enough to withstand light and even heavy rain but starts leaking under extended periods of heavy rain.

The harshest conditions that we’ve used the Flash Air 1 in, was a heavy rainstorm, which included about 30 minutes of heavy rain and several hours of light rain. Aside from some condensation from our own breath, the tent was completely dry.

While trekking the Sierra Nevada mountain range in Southern Spain last autumn, we got caught in a very windy night, with wind speeds of up to 50 m/s. We prepared for that by setting up the Flash Air 1 with large rocks instead of stakes, and in the end, it held up really well. The guylines came a bit loose but that was only because we hadn’t fully locked in the adjustment hardware on each guyline. It was a pretty rough night with only a little bit of sleep, and the walls of the tent kept brushing against us all night, but overall, the Flash Air 1 stood up really well.

The largest downside of the Rei Flash Air 1 is definitely its lack of ventilation, which results in a lot of condensation buildup. For ventilation, there’s only one ventilation shaft at the top, two small mesh panels on corners, and only the vestibule wall is covered with fabric mesh. This doesn’t provide enough airflow, and in very wet areas, you’ll get a lot of condensation buildup. It isn’t an issue in dry climates with low humidity and up in higher altitudes. But if you’ll be using this tent in very humid climates where it rains quite often, you might want to purchase a double-wall tent.

With the Flash Air 1, you have to always be wary of how and where you’re setting up the tent. If it isn’t raining, always keep the vestibule open, and you won’t get any condensation. If it will be raining, try to set up the tent under trees and don’t set it up near water sources, which will minimize the condensation buildup. If you can keep your gear inside the tent, you can unzip the vestibule halfway even in rain, and it will provide more ventilation. Also, you should try to build this tent in open areas where it’s windier. If you follow all of the tips mentioned above, you won’t have any issues with condensation.

But if you’re looking for an easier solution, which doesn’t require you to be wary of where and how you set up the tent, you should purchase something else, preferably, a double wall freestanding tent. A lot of ultralight tents have issues with condensation buildup because of a single wall design, but other models, such as the ZPacks ultralight tents deal with this issue by having a raised up ceiling with breathable mesh fabric used at the bottom part of the walls all around the tent. The Flash Air 1 would surely benefit from this design, but then again, it would be heavier because of the extra fabric. We’ve read that the Flash Air 2 (the two-person model) has much fewer issues with condensation because it has two vestibules and allows for more airflow.

The Rei Flash Air 1 is undoubtedly one of the cheapest truly ultralight tents that you can find. On the plus side, it’s made by REI, which means that it’s somewhat durable (no problems for us so far,) it weighs only 24.7 oz / 700 g if you use your own trekking pole, it packs down very small, and it’s fully waterproof. But it does come with a few drawbacks as well. Most importantly, it’s pretty bad at ventilation, which means a lot of condensation buildup if you aren’t careful about how and where you set it up. In addition to that, it’s also pretty tight inside, not much more compared to a regular bivy, and it can be challenging to set up when you first start using it.

If you’re a truly ultralight hiker on a budget, then the REI Flash Air 1 is a very solid option if you don’t mind a little condensation here and there, and if you’re fine with sleeping in a somewhat cramped overnight shelter. We’d buy it again, but it’s not for everyone.