Why Do People Wear Cowbells When Hiking? 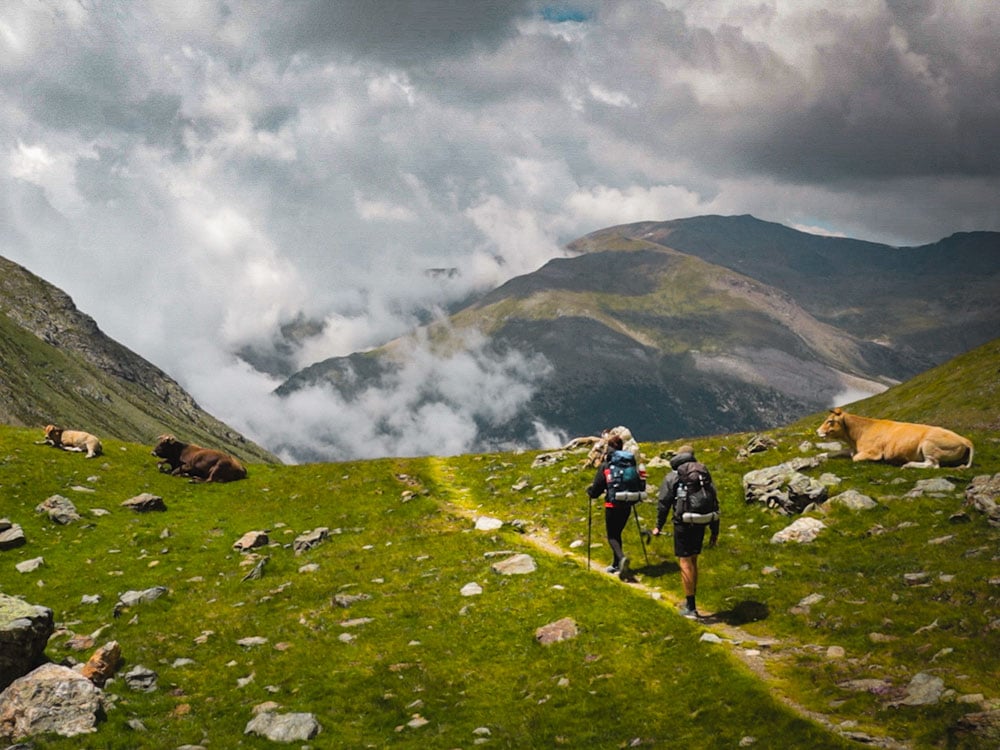 If you’ve been hiking for a while, you’ve probably seen hikers wearing cowbells attached to their backpacks. And while that seems completely normal for experienced hikers, it doesn’t make much sense to regular people who are new to hiking. Why on earth would someone attach a cowbell to their backpack? In this article, you’ll find out.

Why Do Hikers Wear Cowbells?

The reason why some hikers attach cowbells to their backpacks is quite simple – the sound of cowbells scares away wild predators, such as bears, wolves, bobcats, and mountain lions. These predators usually aren’t interested in attacking humans, unless they’re unexpectedly scared. By attaching a cowbell to your backpack, wild predators will be able to hear you a mile away, and they’ll just get out of your way.

While some hikers use a regular, simple cowbell, there are dedicated bells made exactly for this reason, and they may be named slightly differently, such as “noise makers”, “bear bells“, or “hiking bells”. Essentially, there isn’t much difference between them, except that they might be slightly smaller and make a slightly different sound. But the principle is the same – they make sounds when you move, which supposedly, scares away all the predators before you encounter them.

People seem to be in disagreement about whether cowbells and bear bells actually work. Some people say that of course, they do – there’s a reason why they’re so common in bear country and are advised by almost any park agency for reducing the chances of encountering wild predatory animals. And it makes sense because most wild animal attacks happen when the wild animal is startled and wants to proactively defend itself or its babies. Bear bells are pretty loud and any wild predator should hear them a mile away, right?

Well, not according to some people who swear by the fact that bear bells are only for first-timers and tourists. These people say that wild predators completely ignore these sounds because they sound similar to birds chirping, or that the wild predators might actually hear the bell and become curious to find out where’s the sound coming from. In the second scenario, the bear bell would actually be working, because the animal wouldn’t be startled when seeing a human, so it isn’t really a valid argument against cowbells.

Although both sides have valid points, these are just speculations, so let’s look at some research on bear attacks and cowbells.

Read Next: Is It Okay to Hike in Jeans or Should You Buy Hiking Pants?

Research about Using Cowbells When Hiking

In a more recent study, Tom Smith of the U.S. Geological Survey’s Alaska Science Center has found evidence that bears may ignore the sound of cowbells. He hid in a shelter near a populated bear trail, and from a distance, he used bear bells and observed the reaction. He noticed that bears didn’t pay any attention to the sounds of bear bells, even if he sounded them at full volume. What’s more interesting, is that he observed that bears immediately responded to the sounds of twigs snapping and loud huffs, which mimicked the sounds of bear roars. Although other factors might have been at play, he suspects that bears could be ignoring the sounds of bells, similar to how they would ignore birds chirping.

Unfortunately, no more research has been done about the subject (at least, none that we could find) and both of these studies seem to be done in an “amateur” manner, which means they don’t really prove anything conclusively.

Should You Get a Cowbell When Hiking In Bear Country?

Even if cowbells aren’t conclusively effective against bears and other wild predators, they most likely provide an additional layer of safety when hiking in bear country. Wild predators hear the unnatural sound of bear bells and hopefully understand that something unnatural is approaching. In the best-case scenario, they’ll run away, but if not, at least they won’t be startled. So our advice would be to always use bear bells when hiking in bear country but don’t rely on them fully. You should use other techniques as well if you want to successfully avoid all wild predator encounters.

Read Next: What Is Cross Country Hiking? (Guide)

Cowbell Alternatives for Scaring Away Predators When Hiking

The most effective tool against bear attacks (if you actually encounter one) is using bear spray. Essentially, it’s an upgraded version of regular pepper spray, which shoots off at a longer distance, and shoots out a wide mist instead of a targeted spray. If you encounter a bear and it isn’t running away, you should spray a small amount (1-2 seconds) of bear spray if it starts approaching you, and spray the rest of the bear spray directly towards its head if it moves in closer. Bear sprays usually last only about 6-8 seconds, so remember to use them wisely. Bears have a heightened sense of smell, so the negative effects of pepper spray are multiplied many times, which is why bear spray is so effective.

When hiking in a location with bears, wolves, mountain lions, and other predators, you should always keep your food and scented items (soap, toiletries) inside an airtight container. Bears can smell something miles away, so limiting the smell of food makes the bear less interested in encountering you. There’s a large variety of bear canisters available and they aren’t too expensive. They’re definitely a must if you’re hiking in bear country.

3. Making Noise with Other Techniques

Although cowbells make a lot of noise, some people think that the sound of bells doesn’t affect a bear in any way – it’s like the chirping of birds. That’s why you shouldn’t rely only on cowbells. To reduce the chances of startling and encountering a wild predator, always make as much sound as possible. Some examples of this would be to intentionally step on branches, hanging your cooking pot next to another metal object, so they hit each other when you walk, singing, talking, or even occasionally yodeling … (Okay, maybe that one is a bit too much but you get the point.)

4. Walking In a Group

A great way to let the bears know that you’re there is to walk in a group. You’ll naturally talk to each other and make much more sounds when walking in a group.

5. Avoid Walking In Dawn or Dusk and Build a Campfire during Night

Most animals drink and feed right at dawn or dusk, and it just so happens that it’s also the prime hunting time for bears and other wild predators. That’s why you should avoid hiking at dawn and dusk if possible. Two hours after sunrise and two hours before sunset should be more than enough. Also, try to make a campfire if it’s allowed, as wild animals can see it from a distance, and they’ll most likely get scared and run away.

6. Be Extra Careful When Walking Along Rivers and in Windy Days

When you’re hiking in a place with wild predators, you always have to be wary of your surroundings. You need to make sure that all wild predators can hear you from a distance and run away when they hear you approaching. If you’re walking along a loud river, always be wary of predators that might not hear you approaching. On very windy days, make sure not to approach something from an angle where a predator might not be able to smell your scent because of the direction of the wind.

If you’re hiking in very populated grizzly, bear, or white bear territories, you’ll probably be advised to go out with a guide that carries a rifle or bring one yourself. Where there are too many bears and too few humans, bear encounters become unavoidable, and in those instances, the most reliable tool for protection is a rifle. And when a bear attacks, you should always shoot to kill, not to wound because the bear is very unlikely to back away once the fight has started.

Hiking in bear country or in a territory with a lot of mountain lions can be a very rewarding experience because usually the scenes there are much more untouched and wild. But you need to go prepared, and you should avoid encounters with wild predators at all costs. Startling them unexpectedly is the worst thing that you could do because they’re very likely to feel threatened and attack. That’s why you should let them know that you’re approaching, and cowbells, other known as bear bells, are a great way to do that. But you shouldn’t rely only on bear bells. You should make a lot of other sounds as well, and use other techniques to stay safe, such as using bear sprays.